Miss Smokey and Bandit will be pulling the sleigh or wagon during your mountain excursion.

Bandit is a 12 year old gelding (sterilized male) with a 6 year-old childlike personality. Always ready to go, you will notice he will be the first to say “Let’s get the show on the road!” As he pulls at the lead-rope in anticipation, he is the first to role after the days work. Fun fact: He hates to be brushed!

Miss Smokey is a 19 year old mare (mature female) whoe does very well for her age. She is a little more laid back, but her desire to please and willingness to work will prove to be a pure delight. Often, she will be the first one to break into a trot, bringing squeals of delight from our younger clients. She loves to be scratched behind the ears, and is very loving.

Both originally came from a property where the animals were trained to pull horse-drawn farming implements. Later they were sold individually, and eventually retired at Garden Valley Trail Rides where they became a team: drawing wagons in the summer, and pulling sleigh rides in the winter.

It is important to know, however, that a ‘team’ is not just a set of horses willing to work for ya. They, and their equipment were loaned to Paul Felty in the late fall of 2017, giving him a chance to ‘try on a dream.’

The exuberance of the team is matched by their owner. His expert ability to handle and earn the affection and respect of many horses is a key ingredient in communicating his instructions down long threads of leather called ‘lines’.

Paul was able to purchase these fine animals this year and finds himself in the delightful position of being able to bring this nostalgic experience to the public.

He says “I get to do something I always wanted to do, while allowing these amazing horses to support themselves.” 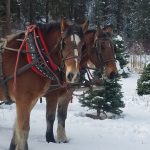 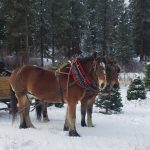 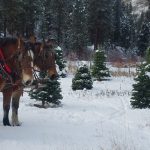 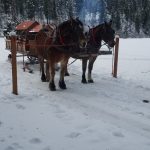 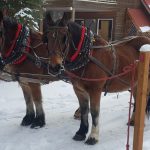 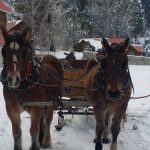